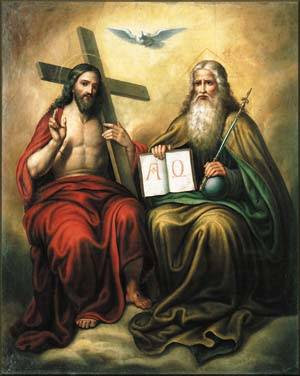 From the Athanasian Creed:

So the Father is God, the Son is God, and the Holy Ghost is God. And yet they are not Three Gods, but One God. So likewise the Father is Lord, the Son Lord, and the Holy Ghost Lord. And yet not Three Lords but One Lord. For, like as we are compelled by the Christian verity to acknowledge every Person by Himself to be and Lord, so are we forbidden by the Religion to say, there be Three Gods or Three Lords. The Father is made of none, neither created, nor begotten. The Son is of the Father alone; not made, nor created, but begotten. The Holy Ghost is of the Father, and of the Son neither made, nor created, nor begotten, but proceeding.

So there is One Father, not Three Fathers; one Son, not Three Sons; One Holy Ghost, not Three Holy Ghosts. And in this Trinity none is afore or after Other, None is greater or less than Another, but the whole Three Persons are Co-eternal together, and Co-equal. So that in all things, as is aforesaid, the Unity in Trinity, and the Trinity in Unity, is to be worshiped. He therefore that will be saved, must thus think of the Trinity....

This is He Who Was, Who Is, and Who Is To Come.