A not-so long time ago in a 'blogosphere very close to here a first post appeared.


It was a very modest beginning. The author, with all the enthusiasm of any rookie 'blogger, announced his presence with a short and sweet blast upon the internet. He knew he wanted to get involved, but was going to be thoughtful about topic and tone. He even managed to create a somewhat memorable catch phrase in his opening words.

It seems like he met with a modicum of success his first two years, then life started handing him lemons and stalled the momentum of his writing. Posting became sporadic and repetitive, with lots or rehashing of old material, with a rare occurrence of something fresh, with mostly long stretches of silence. A star that was seemingly becoming brighter started flickering like a dying nova. Now one has to peer hard to see if it still exists.

Well, a baker's dozen years later, it does. Deo gracias.

I hope that is an accurate assessment of the style and substance of this still "small, quiet voice". It has been and still is an enjoyable part of my life, one which is not ready to be retired, despite the times I have entertained that thought. If I had any place of prominence in the 'blogging world, it's long gone.

Yet my ego is the last thing that needs to be placated. While there have been times the subject has been my life, I have never wanted the 'blog to be about me. The very few times I have had something meaningful to write, when the focus has been about and on God, that is when this star has shined the brightest. And that has brought me enough satisfaction.

I will be the first to admit this infinitesimal corner of the universe does need to be refurbished, just to keep in step with the technology. But I have more immediate and pressing concerns. While not as active, I still keep on eye on events. When I comment, I want my words to have an impact, however small it is. I will continue to bide my time, as long as I still have it here on earth.

While the status quo is status quo, I still have hope for the best, both in this 'blog and in my life. As I said thirteen years ago, "I have some ideas, though." The fertile ground is there, I just need to prepare it.

May God grant me the grace to do it.
Posted by Ron Rolling at 12:19 PM No comments:

Here we are again.

It is starting to become familiar to us as individuals and a country--the ceremonies, the tributes, the memorializing. In the places where it happened--New York, NY; Washington, DC; Shanksville, PA--there is more poignancy to the rituals. It is as if we are still returning to "normal" while we are still grieving.

It seems history's most memorable moments are written in blood. So it is with the terrorist attack that claimed 2,996 lives seventeen years ago this day. We have sworn as a nation to "Never Forget" what happened; to this day, we have lived up to our vow.

The images we saw that day and for the next few are still indelible in the country's psyche. Secular icons, yet with an ennobled meaning.

The attacks were a challenge to the core beliefs of the nation. The honor of being the flag bearer for freedom and liberty was insulted. Once again, in my very humble opinion, we defended that honor and those core beliefs against this act of aggression, as we have before. As it is said, "Freedom is not free." In our own way, we pay the price for it and count the cost as nothing.

So once again, as we have in our very recent past, let us remember this day. If there is a tribute in your area, think about attending. This post will be one of many on the 'blogosphere; as always, I encourage you to seek those whose eloquence will far surpass this very humble offering.


1. The souls of all who died.
2. Those who still mourn.
3. Those who seek a just solution.  (While this may have been accomplished May 1, 2011, have we really solved the problem?)
4. Forgiveness toward our enemies.
5. Our enemies (didn't Someone command us to do this?).
6. The courage to continue the fight.
7. Peace. 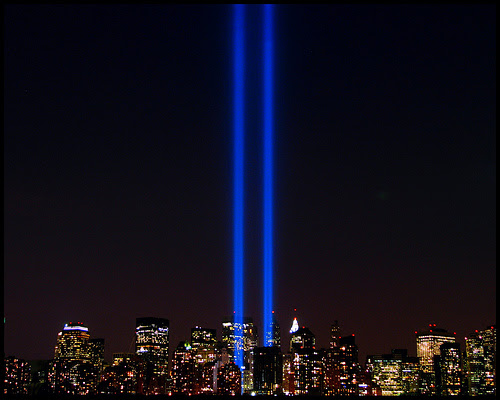 Posted by Ron Rolling at 6:46 AM No comments:

Here is the intention for this month when reciting the Morning Offering:

A reflection for this intention is found here.
Posted by Ron Rolling at 1:56 PM No comments: