Time sure flies when you're having fun.

But, then again, how much fun did I have the past ten years?

As for the past year, I could just re-post this. (The more things stay the same, the more they are the same.)

The search for a full-time job continues to bear no fruit. I don't mind it when an employer hires or narrow their search for someone who is a better fit for them; that's part of the process. It still bothers me a bit when applications seem to go into the rabbit hole of no acknowledgement (which seems to me say I'll get no consideration). It bothers me even more to have applied for something and then discover the position was filled by the person who was serving in an interim role. Then why bother to advertise an opening at all? But the one thing I don't understand is when someone says their search is going to go in a different direction. Is that just a polite way of saying I'm not what they seek? (Time to revive that post with the prayer to St. Anthony seeking his intercession in the job search.)

As I was reviewing all of my past posts about this day, I was reminded about what I said in 2015. I have to ask myself if I have grown in courage since I wrote that. The answer is, "Not enough, if at all." Fortitude, like all virtues, must be exercised. It only grows with grace. I can't talk a good game anymore. Actions do speak louder than words.

So, what's in store when the calendar gets changed?

"Give us this day" and let's see what happens.

Posted by Ron Rolling at 9:00 PM No comments: 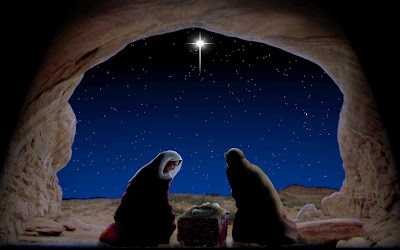 May the Infant Jesus bless you and yours.
May the Christ Child bring you peace, joy, hope, and love.
May the newborn King of Kings and Lord of Lords reign in your heart and life.

Merry Christmas, Everybody!
Posted by Ron Rolling at 8:00 AM No comments:

The First Reading from the Mass of the Nativity of the Lord--At Dawn:

See, the LORD proclaims to the ends of the earth:  say to daughter Zion, your savior comes! Here is his reward with him, his recompense before him. They shall be called the holy people, the redeemed of the LORD, and you shall be called "Frequented," a city that is not forsaken.

Of the four Masses offered at Christmas, the Mass at Dawn is probably the least attended. The Masses prior to this one claim the most attention--the Vigil Mass because of of its convenience; the Mass During the Night, its sentimentality. Event the Mass that follows this one, the Mass During the Day, has more of the faithful in the pews.

This is even more true if for "pastoral" reasons, only one set of readings is used for all the Masses of the Nativity regardless of time of day. This practice is a bit of a travesty. Each of these Masses has its own unique theme. When they are prayed in proper order, they speak the entirety of the message of the event we celebrate. (Lest you think I have never assisted at this Mass, think again. I have been assigned as a cantor a few times in my life.)

The reading for this Mass, save for the Gospel (a continuation of St. Luke's account of the Birth of Jesus), are not that well known. I have shared my reflections of the Second Reading in an earlier post. Once again, as a form of lecto divina, I will share my thoughts about what I have read. As always, take them as a point of departure for your own meditation.

See, the LORD proclaims to the ends of the earth. God is always speaking to us. Creation came to be by just a Word from the Father on the breath of the Spirit. He spoke to Adam and Eve. After the fall, as the Letter to the Hebrews reminds us, "In times past, God spoke in partial and various ways to our ancestors through the prophets; in these last days, he has spoken to us through the Son" (cf. Hebrews 1:1).

Say to daughter Zion, your savior comes. Throughout salvation history, God has promised to deliver us from the effect of Original Sin. What He has promised, He now has delivered. The "O" Antiphons point us to the Savior under various titles for which He is known. But it is the last one--Emmanuel:  God is with us--which is the most relevant. The Son of God, Jesus (a variation of Joshua, meaning "God Saves"), has now come down to earth in a form we can recognize, if only we open our hearts.

Here is his reward with him, his recompense before him. As I understand this sentence, "his" refers to the People of God while "him" refers to God. And what is this eternal reward, this infinite recompense? If it comes from God, it has to be that vast, for He is that vast, as has the waiting of humanity to be freed.

They shall be called the holy people, the redeemed of the LORD. Once again, and for the last time, God has begun to make a new covenant with humanity, first offering it to the Israelites, then to the Gentiles. The terms will be revealed in the life and teachings of Jesus Christ, climaxing in His Death and Resurrection. And as in all covenants, we have to uphold our end of the bargain. Once again, St. Augustine reminds us that while we were created without our permission, we will only be save with it.

This is the universal call to holiness to which the Second Vatican Council refers. We have been sanctified through and in Christ. As He has redeemed us by His Blood, we, like the door lintels of the Israelites at Passover, have to be marked with this sign. The Lamb of God has taken away the sins of the world. We only have to be properly disposed to receive this great grace. The Word has said the word; we have only to obey (hear again).

This is how we are adopted as children of God.

You shall be called "Frequented," a city that is not forsaken. God is with us always. He has never forsaken us, although by sinning we have forsaken Him. Through His Church and with the help of the Sacraments, especially the Eucharist and Reconciliation, He stays with and within us. It is more than being "frequented"; it is indwelling.

While all the readings for this Mass are short, there is a sweetness and depth to them just waiting to be explored. Like Mary, we have the opportunity to ponder these things in our heart. Perhaps, if you still have things to do Christmas morning, you may first want to "go, then, to Bethlehem to see this thing that has taken place, which the Lord has made known to us." (cf. Luke 2:15)

The Morning Star waits for you in this new dawn.
Posted by Ron Rolling at 6:00 PM No comments:

Preparing For A King

It's been a long time since I have heard this hymn, much less sung it (the tune, by the way, is Truro). I never realized it is an Advent hymn until this year. But the lyrics, based on Psalm 24:7-10, originally written by George Weissel and translated by Catherine Winkworth, fit the themes of preparing and waiting:

1. Lift up your heads, ye mighty gates;
behold, the King of glory waits;
the King of kings is drawing near;
the Savior of the world is here!
2. Fling wide the portals of your heart;
make it a temple, set apart
from earthly use for heaven's employ,
adorned with prayer and love and joy.
3. Redeemer, come, with us abide;
our hearts to thee we open wide;
let us thy inner presence feel;
thy grace and love in us reveal.
4. Thy Holy Spirit lead us on
until our glorious goal is won;
eternal praise, eternal fame
be offered, Savior, to thy name!

Ero cras.
Posted by Ron Rolling at 8:00 AM No comments:

"O" We Came Once More

The Catholic Church is wonderful in its liturgical rhythm, both during the day as well as throughout the year. The genius of the Divine Office/Liturgy of the Hours shows the beauty of the request to pray at all times. And as one gets drawn into the rich cycles of prayers and antiphons, one will find favorites.

Among the most favorite section of the entire prayer are the antiphons sung before the Magnificat used during Vespers/Evening Prayer from December 17-23. Each sunset, a different title of the soon-to-be-born Christ Child is referenced. These words show how the words of the prophets come to fruition in the blessed fruit of the womb of the Virgin Mary.

These seven antiphons, collectively known as the "O" Antiphons, were an inspiration in my early days as a 'blogger. Every year since this 'blogs inception, I have presented them as a series of meditations, adding things as I saw fit. They have been some of my most popular posts as well a a good way to finish the Advent season. While I do bring out a lot of repeats, these are still worth the effort to re-post.

I hope you have enjoyed them again.

I promise to have a preview for these next year.
Posted by Ron Rolling at 9:00 PM No comments: