In the almost six years I have been in Farmington, the house in which I reside has had more than its share of pets abiding with Catherine Garcia and me.  You were introduced to the two German Shepherds about two years ago under unfortunate circumstances.  The house has also played host to four cats (another story for another time) and two other dogs since my arrival.

The other two canines belong to Catherine's two youngest children.  Due to unforeseen circumstances, Catherine has been asked to shelter the animals for a time.  One is a three-year old, male, purebred, brindle colored boxer named Boston, owned by her son.  The other was a female, black Labrador retriever mix who was owned by her youngest daughter.

Yes, unfortunately, past tense.  Tragedy has once again befallen this humble homestead of pet owners and caretakers.  Another obituary for another dog.

Let me introduce you to Samantha.  (The photo is of her when she first arrived; she grew into the classic retriever shape--lean and long.) 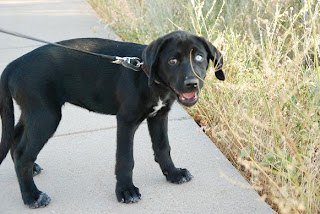 The mix part of her was that of husky.  The only hints of it were the different colored eyes (one brown and one steel blue), gray markings on the tip of her tail and all four paws, and a thin streak of that coloring on her breast and stomach.  Speaking of that tail--her wagging it would have given Eugene a run for his money, in terms of speed and force.

She was not a native of Utah.  According to the story I have been told, she and her brother were abandoned at a rest stop.  Somewhere in Colorado.  (When I hear that, I alternate between shaking my head in dismay and having my blood boil.)  A family rescued them and brought them back to the Salt Lake City area.  After they were properly vaccinated, an ad was posted on a local internet bulletin board.  Sometime in September, 2012 she had her new home.  Here.  (Her owner was still living at home at the time.)

Her high energy level was a great match for Boston.  The two of them became great buddies and playmates. It was always amusing to see them wrestle each other, whether indoors or out.  The growls emanating from both sounded so fierce at times.

She was definitely a retriever.  She took more small bags of garbage out the pet door than I remembered counting.  One also couldn't leave any kind of loaf of bread on the counter.  And let's just say she was more than helpful in taking down clothes from the clothesline before they were dry, never mind the two recliners that were her favorite chew toys.

One has to wonder if there were abandonment issues with her.  While not constantly wanting attention, she did want to be around people, even more so when her owner moved into her own apartment last April, a complex where Samantha could not stay permanently.  One also had to wonder about her being secure.  Scolding her for misbehaving sometimes caused her to roll on her back in a submissive position.  Yet she had that same posture for when she had your total attention and plenty of affection.

More than anything, she wanted to love and be loved.  She was always looking for an opportunity to lick your face. You did get a sense that she was glad to be here.

But, she was a strong-willed dog.  She wanted the world to be her back yard, not just the 1/10 of an acre which was.  She took advantage of opened house doors and fence gates when she could.  Running around the neighborhood, it was always a game of chase with her.  She was difficult to catch.  And that would be her downfall.

Last night, she escaped as Catherine and I were ready to take one of Catherine's friends home.  It was about 8:45 PM, with cloudy and rainy skies obscuring the twilight.  We lost sight of her after she went to a neighbor's yard.  She did knew where "home" was, so we decided to not chase her.  When we came back about forty minutes later, and after a short drive around a few blocks, looking at places where we knew she had visited and thought she may be, I just about ran her over coming into the driveway.  But, she still wouldn't come inside.  Again, we decided not to chase.  About 9:30, I went outside and stood on the front porch looking for her.  She ran by, still wanting to be chased.  I didn't.

It was the last time I would see her alive.

About fifteen minutes later, two teenage girls came to the house.  Catherine met them outside first, then I joined them quickly.  They broke the news to us, then led me to where her body was, just a couple of blocks away.  In picking her up to get her out of the street, her head went limp, a sign that her neck was broken by the impact and she died immediately.  Catherine joined us a few minutes later.

The young ladies gracious stayed with the body for a bit as Catherine and I went back home.  I returned to the accident scene, wheelbarrow in tow.  I gently place her in it, carefully positioning her in a way that made me feel I was still giving her dignity as a living creature.  The girls escorted me home and then walked back to their house.  I place this temporary morgue under the car port and covered it with a tarp, securing it with cinder block, to protect her from the elements.

About 9:30 this morning, Catherine called the county's Animal Control Department and requested disposal of the remains.  An officer came about an hour later.  I assisted her in putting Samantha in the truck bed.

While I was waiting, I returned to accident scene.  As I looked north from where her corpse was found, I notice a trail of dry blood, the point of impact.  I don't think the driver could have seen her, but I wonder why the person didn't stop to help. (Another boiling point).   I estimated the distance between the two points at about 15 yards.

"Sammie", as she was more commonly called, was only 15 months old.  (I don't know how I find these connections; I just do.)

There is some "survivors' guilt" here, a sense of second guessing our decisions.  It is part of the grieving process; it will, eventually, be done.  There is a solemn and sober mood here, as there should be.

Samantha, you were loved and will be missed.

And I want to thank you for the message that was your life.

Sometimes, you have to live like the gate is open.
Posted by Ron Rolling at 3:25 PM No comments:

Well, it's going to happen again.

Frankly (and with quite a bit of bias, I might add), I think it's a very good thing.

While I might not be the embodiment of Irenaeus spirituality, I still hope I show some of God's glory in my life.

I still happen to enjoy "living and moving and having my being".  I still like this mortal coil, while heeding the voice of the Trinity.  I still revel in the challenge of being in the world but not of the world.  While I still struggle with the crosses I have (and accepting the ones I haven't yet), it is and will be worth it to work out my salvation in trembling and fear.

God knows of my successes and failings regarding that matter.  His Grace is sufficient, but only if it is used.  I know I lack, but He knows how much.  To eventually see Him as He is requires the work of a lifetime; buoyed by the Church He founded and the other disciples who follow Him, it can be accomplished.

Max Ehrmann is correct, "With all it's sham, drudgery, and broken dreams, it is still a beautiful world."

I rejoice and give thanks to God I am still a part of it.

May I be blessed to see the next time this date comes on the calendar.
Posted by Ron Rolling at 7:18 PM No comments:

Quite the newsworthy day at the Vatican.

First, there was this announcement.

Then, there was this announcement.

The Church rejoices for both.

Prayers For A Nation

Today ends the United States Catholic Conference of Bishops' "Fortnight For Freedom" campaign, which consisted of a series of prayers, reflections, and public activities to promote the defending of religious freedom as truly framed in the First Amendment of the Constitution of the United States.  I don't know how much your parish or diocese participated, but I hope it did some things.

Fr. John Zuhlsdorf at "What Does The Prayer Really Say" posts on a prayer composed by the first Bishop of the United States, Archbishop John Carroll of Baltimore.  As one of his commenters noted, it makes a great template for the Universal Prayers.

Our country needs intercession more than ever.

Perhaps some of these could find their way into your prayer life.

Immaculate Mary, patroness of the United States of America, pray for us.

Here are the prayer intentions for this month when reciting the Morning Offering:

Mission:  Asia. That throughout Asia doors may be open to messengers of the Gospel.

Posted by Ron Rolling at 7:00 AM No comments: