Rise up in splendor! Your light has come, the glory of the Lord shines upon you.
See, darkness covers the earth, and thick clouds cover the peoples; But upon you the LORD shines, and over you appears his glory.
Nations shall walk by your light, and kings by your shining radiance.
Raise your eyes and look about; they all gather and come to you: Your sons come from afar, and your daughters in the arms of their nurses.
Then you shall be radiant at what you see, your heart shall throb and overflow, For the riches of the sea shall be emptied out before you, the wealth of nations shall be brought to you.
Caravans of camels shall fill you, dromedaries from Midian and Ephah; All from Sheba shall come bearing gold and frankincense, and proclaiming the praises of the LORD.
All the flocks of Kedar shall be gathered for you, the rams of Nebaioth shall be your sacrifices; They will be acceptable offerings on my altar, and I will enhance the splendor of my house.

When Jesus was born in Bethlehem of Judea, in the days of King Herod, behold, magi from the east arrived in Jerusalem, saying, "Where is the newborn king of the Jews? We saw his star at its rising and have come to do him homage....Then Herod called the magi secretly and ascertained from them the time of the star's appearance....After their audience with the king they set out. And behold, the star that they had seen at its rising preceded them, until it came and stopped over the place where the child was. They were overjoyed at seeing the star, and on entering the house they saw the child with Mary his mother. They prostrated themselves and did him homage. Then they opened their treasures and offered him gifts of gold, frankincense, and myrrh. 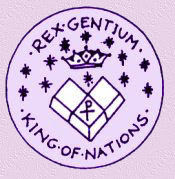 It was a question which framed the beginning and end of His life.

A question of identity.

"Where is the newborn king of the Jews? We saw his star at its rising and have come to do him homage." (Matthew 2:2)

Strangers in a strange land, the Magi saw a glimmer of the Light and inquired about to Whom it lead. When told, they were able to hear the Word and find Him, while those who help them wanted to silence the echo. The echo would now grow louder because more would be able to hear it.

An earthly ruler, feeling threatened by the Word (history does repeat itself, doesn't it?), asked again. He directly heard, but could not respond. In the end, he would help to attempt to silence once and for all the Word.

And even in between those two questions, people wanted to know if they were among royalty.

Alleluia: for the Lord God omnipotent reigneth.
The kingdoms of this world are become the kingdoms of our Lord, and of his Christ; and he shall reign for ever and ever.
KING OF KINGS, AND LORD OF LORDS.

++++++++++
O King of the Gentiles, yea, and desire thereof! O Corner-stone, that makest of two one, come to save man, whom Thou hast made out of the dust of the earth!