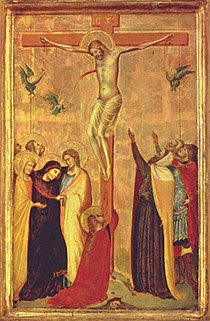 
This begins a series of short meditations upon the statements made while Jesus hung on the Cross.

Yet, one will find example after example of those who "know not what they do." The Scribes and Pharasees debating Him. The rich young man walking away from His invitation. James and John asking for their seats. The crowds shouting their "Hosanna". Peter--well, pick an incident.

Yes, there are degrees of culpability. But, because of Original Sin, there is damage done to our wills and intellects. And it is that damage that does not allow us to truly realize in the very core of our being what our sinfulness does to us. It is in that sense we "know not what we do." It is the war within us mentioned by St. Paul.

Yet, is that not what metanoia is all about? Is that not why we, "with the help of Thy Grace," seek to uproot in our souls that which separates us from God? Is that not why we examine our consciences and seek the Sacrament of Reconciliation, to continue to strengthen what has been weakened?