But a shoot shall sprout from the stump of Jesse, and from his roots a bud shall blossom.
The spirit of the LORD shall rest upon him: a spirit of wisdom and of understanding, A spirit of counsel and of strength, a spirit of knowledge and of fear of the LORD,
and his delight shall be the fear of the LORD. Not by appearance shall he judge, nor by hearsay shall he decide,
But he shall judge the poor with justice, and decide aright for the land's afflicted. He shall strike the ruthless with the rod of his mouth, and with the breath of his lips he shall slay the wicked.
Justice shall be the band around his waist, and faithfulness a belt upon his hips.
Then the wolf shall be a guest of the lamb, and the leopard shall lie down with the kid; The calf and the young lion shall browse together, with a little child to guide them.
The cow and the bear shall be neighbors, together their young shall rest; the lion shall eat hay like the ox.
The baby shall play by the cobra's den, and the child lay his hand on the adder's lair.
There shall be no harm or ruin on all my holy mountain; for the earth shall be filled with knowledge of the LORD, as water covers the sea.
On that day, The root of Jesse, set up as a signal for the nations, The Gentiles shall seek out, for his dwelling shall be glorious. 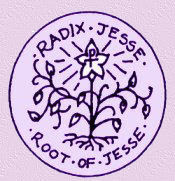 The genealogy of Jesus found in the first chapter of the Gospel of St. Matthew (1-17), the Gospel proclamation for the Mass of Christmas Eve, established Him as a descendant of the royal bloodline of David. It also connects Him to our father in faith, Abraham. Through the trials he endured, the father of many nations faithfully obeyed (heard) the Word.

How appropriate the Word would once again be proclaimed through his lineage. Some 42 generations later, a man who was in that line would have to do the same thing as Abraham. Like his ancestor and his betrothed, Joseph was visited by an angel. The heavenly being brings a similar message which Gabriel announced to Mary. Again, the words were only secondary. Again, the Word is more than an echo.

Like "father of faith," like "son." Two righteous men, the same act of faith. Both obeyed a timeless Word.

O Root of Jesse, which standest for an ensign of the people, at Whom the kings shall shut their mouths, Whom the Gentiles shall seek, come to deliver us, do not tarry.
Posted by Ron Rolling at 5:00 PM