O Antiphon: The Coming Of Wisdom

"The LORD begot me, the first-born of his ways, the forerunner of his prodigies of long ago;
From of old I was poured forth, at the first, before the earth.
When there were no depths I was brought forth, when there were no fountains or springs of water;
Before the mountains were settled into place, before the hills, I was brought forth;
While as yet the earth and the fields were not made, nor the first clods of the world.

"When he established the heavens I was there, when he marked out the vault over the face of the deep;
When he made firm the skies above, when he fixed fast the foundations of the earth;
When he set for the sea its limit, so that the waters should not transgress his command;
Then was I beside him as his craftsman, and I was his delight day by day,
Playing before him all the while, playing on the surface of his earth; and I found delight in the sons of men.

"So now, O children, listen to me; instruction and wisdom do not reject!
Happy the man who obeys me, and happy those who keep my ways,
Happy the man watching daily at my gates, waiting at my doorposts;
For he who finds me finds life, and wins favor from the LORD;
But he who misses me harms himself; all who hate me love death."

At that time Jesus said in reply, "I give praise to you, Father, Lord of heaven and earth, for although you have hidden these things from the wise and the learned you have revealed them to the childlike. Yes, Father, such has been your gracious will. All things have been handed over to me by my Father. No one knows the Son except the Father, and no one knows the Father except the Son and anyone to whom the Son wishes to reveal him.

"Come to me, all you who labor and are burdened, and I will give you rest. Take my yoke upon you and learn from me, for I am meek and humble of heart; and you will find rest for your selves. For my yoke is easy, and my burden light." 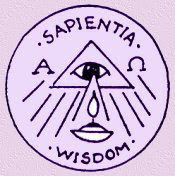 Looking at the beginning of this antiphon, I am drawn to the opening of the Gospel of St. John, which is proclaimed at the Mass of Christmas Day:

It is tied together with the creation story found in the first chapter of Genesis. Each day is climaxed by the phrase "Then God said." Each time, the Father, on the breath of the Spirit uttered the Word, His Son, Jesus Christ. "And so it happened." No matter what was created, it came about through the Trinity. The whole of creation from "one end to another" is ordered mightily and sweetly--it is "very good."

Then entered the need for salvation.

Throughout salvation history, the Word was uttered repeatedly, from Abraham to Moses to David to the prophets to John the Baptist. Some did heed the Word again, much like Elijah hearing the faint whispering sound (1 Kings 19:11-12). But these utterings were only echoes of Genesis. One knows how faint an echo becomes after the first repetition, no matter how loud the original sound.

So became the need for re-creation. The Word was then uttered "to a virgin betrothed to a man named Joseph, of the house of David, and the virgin's name was Mary." Note that when she accepted ("Behold, I am the handmaid of the Lord. May it be done to me according to your word"), she was not heeding the words of Gabriel. She heard the Word as clearly as the first fruits of creation.

There would be no more echoes. 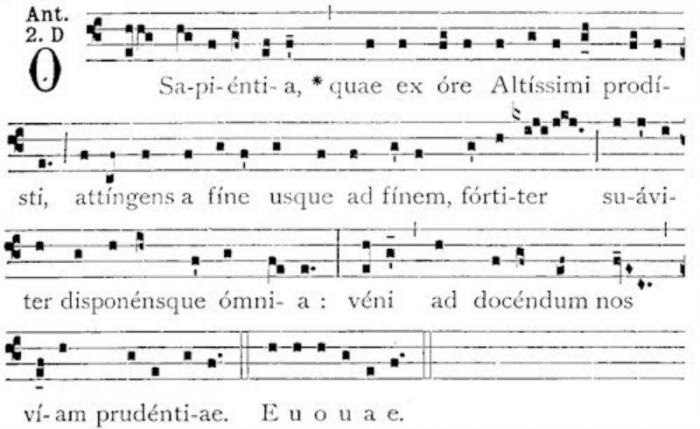 O Wisdom that comest out of the mouth of the Most High, that reachest from one end to another, and orderest all things mightily and sweetly, come to teach us the way of prudence!
Posted by Ron Rolling at 5:00 PM