When I moved to Farmington, not only would I be sharing living quarters with other humans, but for the first time since I was growing up, I also had to deal with household pets; specifically, two German Shepherds: Eugene and Josephine, named after the maternal grandfather and great aunt of Catherine Garcia. (There are now a few more four-legged, furry creatures running around the place, but that's another story.) The dogs were purchased by Catherine's late husband, Luis, almost eleven years ago and have been a part of the home ever since.

Since Easter weekend, everybody had noticed Gene was becoming more listless. We thought it was more a reaction to his lack of enthusiasm for a different kind of dog food, a "hunger strike" as it were. Even when returning to the normal kibble, he still wouldn't eat or drink. One could noticeably tell he had lost weight. This weekend I noticed he had a bloated stomach, but I thought it was from the lack of nutrition, as though he was in starvation mode.

I was dead wrong.

Somewhere in Gene's abdomen, unbeknownst to anybody, a cancerous tumor had grown and burst. The bleeding worked through his digestive system, causing vomiting and bloody diarrhea. (My apologies if this is too graphic.)

Late yesterday afternoon, a neighbor helped Catherine take Gene to a veterinarian, as I was officiating high school soccer matches. The vet confirmed the worse. He offered the possibility of surgery, but with only a 20% chance of survival and another six months of living at the most.

The choice was made. It wasn't easy, but it was the best. Around 6:00 PM, half-time of the junior varsity game, I read the messages from my cell phone.

Pets, in their own unique way, provide so much enjoyment. So it was with Gene. What will be missed is a very good natured dog with all his amusing mannerisms. A tail wag so enthusiastic one could get hurt if he made contact. The range of his vocalizations, from nuisance barkings to a low growl reminiscent of a motorcycle to a whine which resembled a chihuahua to his snoring. His enjoyment of chicken, cheese, and chocolate among the people food he was given at times. The way he very quickly lapped water, at though he just got back from the Great Salt Lake Desert. The ways he would lie down in the most inconvenient of places, making him a "speed bump" at times, a dog rug at others. Perhaps his most enduring manner was, at times he was sleeping, he would roll over on his back, all four legs in the air, and, you would swear, the biggest grin you had ever seen on a dog.

He was happy. He was secure. He was loved.

St. Francis of Assisi, do us a favor.

When you see Eugene in Heaven, tell him he will be missed. 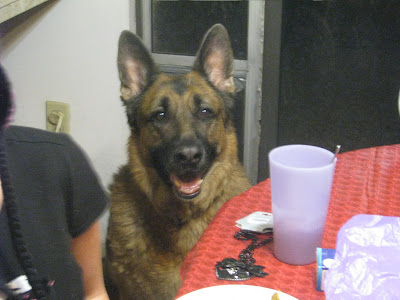