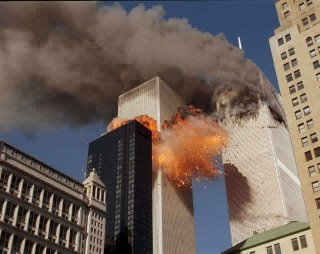 It seems every generation has a moment in its lifetime when a single incident captures its attention and indelibly engraves it in its collective memory. People can recall where they were when they heard the news in incredible detail. This phenomena seems to create a bond and give shape to the identity of those who lived in that time.

This day is such a moment in time for me.

I was working for a wholesale magazine distributor in their return department, just 10 months into my employment with them, when the news broke. Someone from the front office made the announcement. The department's supervisor had a small radio to which she was listening and quick changed to a local radio station which was broadcasting a national feed. Work in my department came to a near standstill as we listened to the events unfold for about the next hour.

My first reaction was that of disbelief. Then, again, how many people thought something like this could happen? Once the reality and gravity of the situation became apparent, whatever feelings of being safe and secure within the borders of this country were now shaken. I was very aware of the tactic of suicide bombers in the Middle East. Would this now open the way for that to happen on our soil? Why wouldn't someone target a shopping mall, school building, civic center, or even a house of worship, now that there was a sense of being emboldened by this?

I felt a loss of power, even though I had none in this situation. I felt a sense of helplessness, knowing there was nothing I could do to prevent something from happening to me. While the loss of human life is tragic, the psychological aspect was affectively sending its shockwaves throughout the rest of the country. But I also felt something else, something which began to counter whatever terror wanted to reside with me.

I felt a sense of hope. I realized that this was in God's hands. There was nothing I could do but to trust in His infinite power, to let Him straighten this crooked line, to place this sense of fear and loss of innocence in His care. A classic case of "letting go and letting God."

The high school volleyball matches I was scheduled to officiate that night were postponed. I spent the evening at my favorite sports bar, but no games were played. The media coverage was still in full force and I was able to catch some of the clips of the horrific events after the first plane hit. I was speaking to an acquaintance of mine while our eyes were glued to a TV set. His reaction was not one of fear. He was angry that someone would act like a cat and use the soil of the United States as kitty litter, although he used a little more colorful language than I.

As we left the bar that night, we both saw a red dot in the southwestern evening sky. It seemed it was not moving. We had no idea what it was. Mars? A plane? We never did come to a conclusion, even after a few days. (I would be interested in knowing if anyone else saw that.)

The next day at work I found Old Glory in one of the lockers. The flagpole in front of the building had been empty for a long time. During a break, I hoisted our country's flag to the top. To this day, as far as I know, it is still flying, although another one has taken its place.

I know the images which have come from this are not ones we wish to remember. It seems there are some who wish we could somehow forget the entire day. We cannot; we must and will remember.

For me and my generation, this is the "day which will live in infamy."
Posted by Ron Rolling at 9:26 AM