It is said bad things happen in threes.

When it comes to canines associated with this house, the trilogy has now been completed.

Between the hustle and bustle of work and holiday preparation, this has been the only chance I've had to say a few words about this. I can report the cause of death was old age.  She was 12 years old.  While Catherine Garcia, her owner, and I were hoping to see her live past Christmas, we also were expecting her demise.  Having outlasted her running mate, Eugene, by over a year and a half, the sadness at her passing was tempered by the knowledge of the good life she had.

Her life wasn't without its troubles.  She came from a person who seemed to be running a bit of a puppy mill and was separated from her mom at four weeks.  Catherine had also told me some relatives of her late husband were rather over the edge when it came to disciplining the dog.  It all added up to Jo (her nickname) being a bit neurotic.

There was no mistaking who the alpha of the pack was, however.  She was large and in charge, but it was all a show.  The other dogs in the house were always afraid of getting past her for whatever reason; many a time I had to escort both Gene and Boston (the boxer who is still with us) past Jo just so they could get to where they wanted to go.  Her favorite stunt was to lay in front of the food and water dishes so nobody could get to them.

However, she would obey the sound of my voice.  For her, I was one of the greatest things on two legs she ever met.  And there were times where her maternal instincts would emerge.  She was very protective of the cats we have, even to the point of somewhat successfully herding them.  There were times she would groom Willow, the large tom we have.  You just wonder what kind of mother she would have been, as evidenced by this photo of her with Samantha. 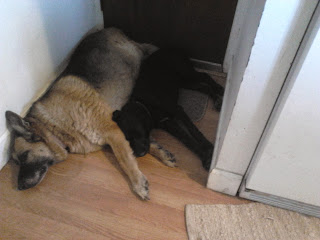 I am told German Shepherds need to be around their breed to be happy.  She did OK after Gene's death, perhaps because Boston was here as well as both Samantha and Chloe (a new lab mix Catherine's youngest got a week after Samantha met her demise).  But the last few months were not easy.  In the last 6-8 months she has noticeably lost a lot of weight.  Then for the past 2-3 months, hip displacia, a common ailment in this breed, developed.  It was hard to see her drag herself around the homestead, but as long as she wasn't in pain. having her euthanized was not an option.  Catherine was even considering having some kind of wheelchair built for her.

But you could tell she was going.  Accidents in the house were a bit more frequent.  She was noticeably tired this past week.  And then she stopped eating and drinking.  When this past Friday came, she barely had the strength to drag herself around the dining room.

Catherine was in her home office/sewing room in the middle of that morning.  I had just stepped into my office to start my computer.  When I came back to the dining room about 10:35,  I found Josephine lying in front of the food and water dishes.  She wasn't breathing.  I called Catherine.  She came out, looked at Jo, and started to sob.  I came to give Catherine a hug; she cried out in a voice that almost sounded like a child.

Like Eugene, Josephine will also be cremated.  Thanks to a neighbor who loaned us the money, we were able to pay to have this done at a local veterinary clinic.  Her remains are expected sometime after Christmas.

In life and death, they will be together.

As it should be.