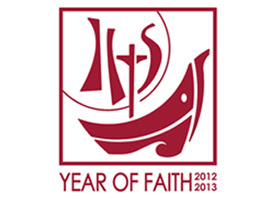 And so it begins.

Today marks the opening of the "Year Of Faith", from now until the Feast of Christ the King in 2013.

The goal, from the website of the United State Conference of Catholic Bishops:


During the Year of Faith, Catholics are asked to study and reflect on the documents of Vatican II and the catechism so that they may deepen their knowledge of the faith.

The upcoming Year of Faith is a “summons to an authentic and renewed conversion to the Lord, the One Savior of the world” (Porta Fidei 6). In other words, the Year of Faith is an opportunity for Catholics to experience a conversion – to turn back to Jesus and enter into a deeper relationship with him. The “door of faith” is opened at one’s baptism, but during this year Catholics are called to open it again, walk through it and rediscover and renew their relationship with Christ and his Church.

In accordance with Faith seeking understanding, I think this could be the most significant year in a person's spiritual life.  Do we understand what we believe? Do we even know what we are to believe? Do we know the tenets of our Faith?  These are the question to be answered in the next 13 months.

I have both editions of the Catechism and have read the revised version (twice).  As to the "Sweet Sixteen", the documents issued in the three years Vatican II met--no, I have not.  Looks like I have some homework to do.

There is so much confusion and division within the Church.  Much of it stems from how to implement what happened as a result of the 21st. Ecumenical Council.  This is where the so-called "spirit of Vatican II" make an appearance.  This is where the hermeneuetic of continuity comes into play.  This is an interaction worth having.

May this be a time when the phrase "ut unam sit" becomes more a reality.

Here is how to gain a Plenary Indulgence during this time.
Posted by Ron Rolling at 4:51 PM